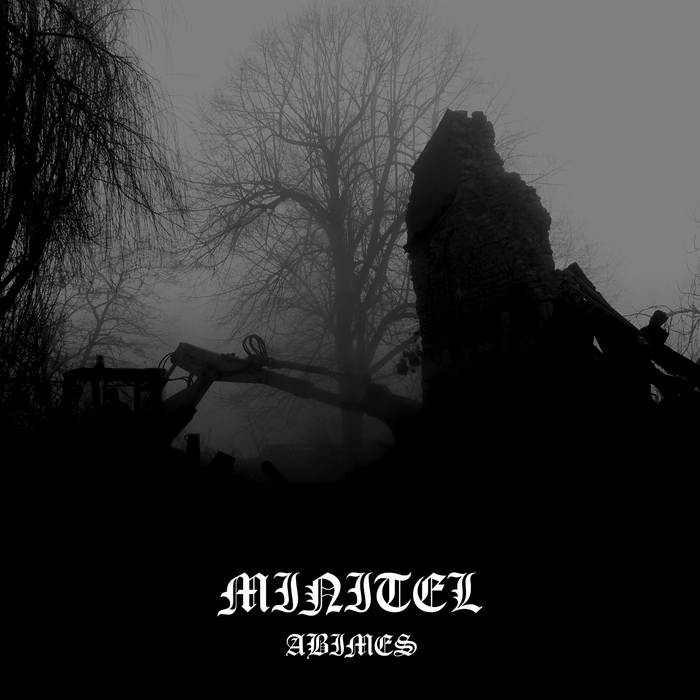 POISONOISE (Fr.) June 4th 2016:
"As summer approaches and that you will soon all be looking for some shade to hide from the heat, I suggest you to put your head in the freezer (or underwater) with an album that’s curdling bloods « Abîmes ». As if it was the soundtrack of a film noir, one is drawn into icy landscapes. Unlike such other projects, there is no frame like martial rhythmics or melodic development from noisy elements. Minitel takes us into an oppressive world for the time of the album with its monotonous but still very elaborated environments . We are visiting a nightmare that is not ours, and it is rather interesting. Minitel, a name that evokes spontaneously rather a world of kitsch synth than the dark ambient that it distils for sure (…)."

CHAIN D.L.K. (U.S.A.) August 1st 2016:
"More interesting music from France courtesy of the Facthedral’s Hall label. There seems to be very little information on the artist, even from the label. ‘Abimes’ is the debut Dark Ambient Industrial Drone project composed and recorded in 2006 by Iconoclast, under the project name of Minitel, and not released until this year. Why, I have no idea. As for Iconoclast, the only other info I have is that Raphael Henry played (and maybe still plays) guitar in a Black Metal band called Sael under the name Iconoclast. Well, that’s at least something, and does explain some of the music on this album. ‘Abimes’ begins with “Vitriol,” a 4 minute noise piece that sounds like white hot ore being processed in a steel mill. Good for noise enthusiasts, but I was hoping the whole album wasn’t composed of pieces like this. “Novocaine Messiah” put my fears to rest with an uneasy calm. Primarily hollowish synth drone with a vague, eerie whistling melody over the top, this somnombulant ambience might lull you to sleep but also inspire nightmares out of the twilight zone. I swear I heard some snoring in there… “Inner Filth” presents a much heavier ambience, a spiraling dark ambient drone piece that lasts for over 22 minutes. “Lurker at the Threshold” juxtaposes a very low tone melodic loop over even lower engine idling with other sonics that sound like snakes slithering over sleeping monsters of the deep. This is the creepiest track on ‘Abimes,’ and owes much to Lustmord’s oeuvre. Finally, we have title track “Abimes” and here is where the black metal comes in. It begins with thick slabs of distorted guitar amidst cooing dove-like sounds, and a thick underpinning of deep, dark drone. As the piece progresses, squeaky metallic sounds can be heard, the guitar fades away, then a slow doom drum loop, and all the while that low, thick drone holds down the bottom. This goes on for quite a while until it seems to fade out until… BAM! at a little over 14 minutes the black metal guitar returns with a vengeance swallowing everything and returns into the abyss from which it came, with only traces of doom drum left. While ‘Abimes’ seems minimal in form, there is a lot of complexity in the drones. I know people who would absolutely love this because of the black metal aspects. For me though, I preferred the middle tracks. Still, very well done. Limited to 300 copies."
3,5/5. Steve Mecca.

VITAL WEEKLY #1041 (N.L.) July/August 2016:
"The music by Minitel, a project by Iconoclast (I'm sure that is a pseudonym), was already recorded in 2006, but for unclear reasons was shelved until now. That, plus the fact there are only 300 copies, is all we know. The cover also doesn't reveal much more than that. Something that happens of course more often and which is no problem. (...) this one is actually something I enjoyed from beginning to end, even when the opening piece 'Vitriol' is drenched with reverb. The other four (and much longer) pieces are all in the realm of moody drone music. Mucho atmospherics floating around. It's hard to say what it is used here, but my best guess would be synthesizers or guitars, lots of effects, and maybe something in terms of field recordings, but I have no idea what that should be really here. This is the kind of dark ambient music that one usually find on such labels as Malignant Records; it is not the most refined kind of ambient, but projects like Minitel explore the all the low end frequencies to their maximum use, and cutting out all those sounds that shed even the smallest bit of light in this music. This is not a release with music you never heard before, but I thought it was very well made, with great care for deep, hidden sonic details. (Frans de Waard)"

Abîmes was performed and recorded in 2006 by Iconoclast.