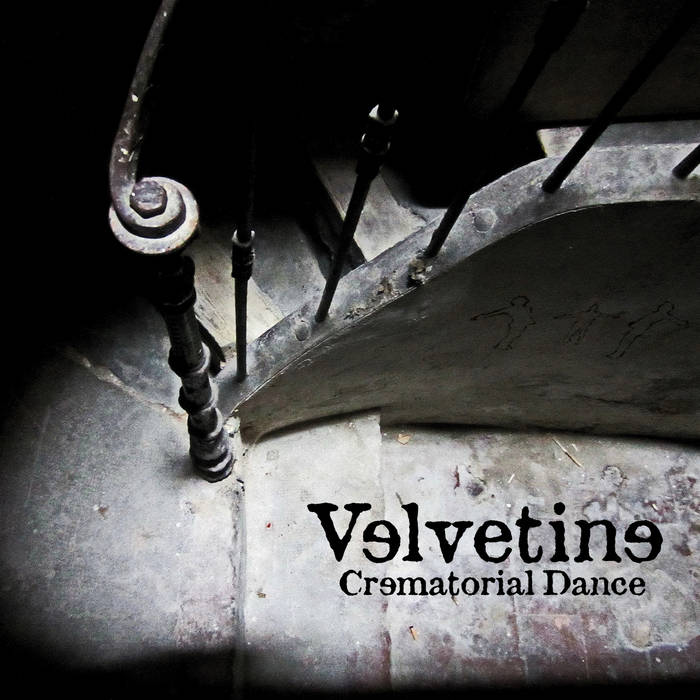 - CHAIN D.L.K. (U.S.A.) August 1st 2016:
“Yet one more from the French Facthedral’s Hall label. Formed in the 90’s under the name Septembre Noir, the band changed its name in 2006 to Velvetine. Band member are: Peache (Pierre-Henri Mandine) on guitars + manufactured instruments; Stef.a (Stefan Mandine) on lead vocals + guitar; and Le K. (Marc Reina) on electronic percussion. Their debut album, ‘Septembre’ was released in 2007 and they followed that up with several EPs and a couple of videos, so ‘Crematorial Dance’ is their second full-length release. I wasn’t able to preview much of ‘Septembre,’ but from the little I’ve heard ‘Crematorial Dance’ is much father along the path. Opening with “Far Away,” Velvetine sets a strong dark tone with this impassioned creeper. Part of Stef’s vocals are in French, and part in English, but you’ll have no trouble getting the gist of the alienation and angst. At first, I thought this reminds me of some metallish dark alternative band whose name escapes me… The second track, “Ulan Bator” (sung completely in French) made the inevitable comparison much clearer – Bauhaus. It’s not only Stef’s sort of vocal similarity to Peter Murphy, but also the psychodramatic intensity of the band’s musical style. It became even more evident on “Along the Way”. The mood and phrasing, very Bauhaus, but still very French. These guys may not be Goth, but the maudlin music and lyrics should perk up the ears of every goth and emo who hears it. To wit, on “L’Immeuble” – “I don’t know who I am, I don’t know who you are, I don’t care for myself…” While it may seem almost a parody taken out of context, Stef’s impassioned delivery makes it real. The music is as simple and uncluttered as Bauhaus, yet refined in ways Bauhaus never was, and often fragile and poetic as on “Broken Harp.” Velvetine cooks up a real NIN-style stomper on “Resolution,” and kicks it up a notch or three on “The Shuttle.” The rhythm aspect of this band is interesting too; Le K. uses a programmed drum base while he manually plays percussion over the top. The dense, distorted guitar give the music a metallish aura, but it’s really far from metal. I really like that the lyrics are in both French and English; it is surely a refreshing approach to this type of music. The exception though is the last track, “Maha Mritunjaya,” a Great Death-Conquering Mantra from the Indian Rigveda. Velvetine puts it across with aplomb and a forceful dramatic flair. Way cool!
‘Crematorial Dance’ is an album that can’t help but grow on you. In fact, during the course of listening to the music (for a fifth time) for this review, I’m upping the rating half-a-star because it’s just that damn good. Copies are limited to 500. Obviously I have mine. I wouldn’t wait to get yours if I were you. Highly recommended!”
4,5/5 – Steve Mecca